Please join us as we commemorate the Shoah. This year’s event will feature special archival video footage of local survivors and a liberator from the Fortunoff Archive at Yale University. We are honored by the many community leaders who will participate in this year’s program.

The community is invited to participate in a special candle-lighting ceremony to honor our survivors and survivor families during the program. The candle lighting is made possible in partnership with the Or Shalom Men's Club. Sign up today to receive your yellow candle. Pick-up locations will be available at several sites around the community.

We invite you to make a donation to the Jewish Federation's Holocaust Memory Fund and/or the Or Shalom Men's Club Yellow Candle Project below. As always, your generosity is greatly appreciated. 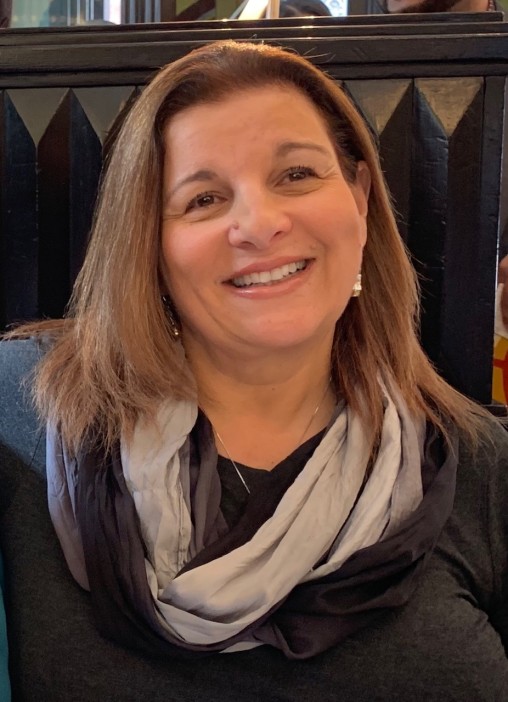 Liora grew up in the loving home of Mendi & Aliza Lazar, along with her dear sister Tamar, in Haifa. Her parents, both Holocaust survivors and camp survivors, derived divergent lessons from their experience. Her mother claimed that her survival was an act of a gracious God. Her father maintained that no model of God could possibly have allowed his experience to happen. In the light of those competing views and with a strictly observant grandfather, in the context of generational trauma, Liora, following her parents' examples, developed into a kind, caring, demanding but forgiving, devout and loving daughter, sister, wife, mother and friend. She embraced and celebrated her Jewish identity and found great satisfaction in building local and global Jewish community.

Liora met her husband Yaron when he was still serving in an Israeli submarine. They both knew very quickly that their sonar had located just the right person to be a partner; formal marriage was a natural step; and 36 years of experience together validated that finding. Shortly after marriage they left Israel and developed their own home in Connecticut, where they enjoyed a family connection, and soon settled in New Haven. Liora completed her studies for a Master’s degree in Social Work just shortly before their first daughter Daphne was born.

As a social worker, Liora worked on a suicide hotline; she worked with teen mothers, and she worked with cancer patients and their caregivers. She instilled trust and she went “all the way” in helping people. Liora offered her own home as a refuge. She knew what to do, she did what was needed, she had expectations, she was persistent, and she cared. She had the fortitude to try when success was not assured, and to travel the road as far as needed. She helped thousands of people, some of them in a way that literally saved or transformed their lives. Liora’s natural personality was the ultimate social worker.

Some of those same qualities made her a wonderful friend. She was strong and supportive, fun and positive. Some of her favorite activities – mahjong, the beach, visiting a winery or hiking, cooking and entertaining – were with family and friends. She loved flowers, she loved food, she loved people. Liora had the tendency to be honest and direct, in the kindest way possible, but without holding back – that quality served her well in her professional life and with her friends and family. She was open, preferred inclusion, and valued each person. In her house and her life “there is room for everyone.”

Liora was a wonderful force at the BEKI Congregation. She was the energy source behind the development of the Benei Mitzva Program. She was a super “PTO” Mom in the Religious School; she was instrumental in BEKI’s social service projects; she helped run the Purim Seudot; she helped run the Sisterhood Giftshop; Liora was instrumental and made an enormous contribution in building our community. Working with Liora has been described as “instructive, engaging, fun, inspirational, and a privilege.”

Liora and Yaron created a warm and loving home for their daughters Daphne, Dana, and Maya. Liora was a devoted supporter and advocate for their daughters – she had the direct phone number of the superintendent of schools – and she encouraged them in their school, ECA, extra-curricular activities and then in their advanced education.

Ensuring their academic success and fostering the qualities of character required for success in any venture were her major concern. Her family brought her joy and meaning, satisfaction, purpose, care, hope, and love. Her legacy of good works, the life and love that she created, will continue to be a source of blessing. 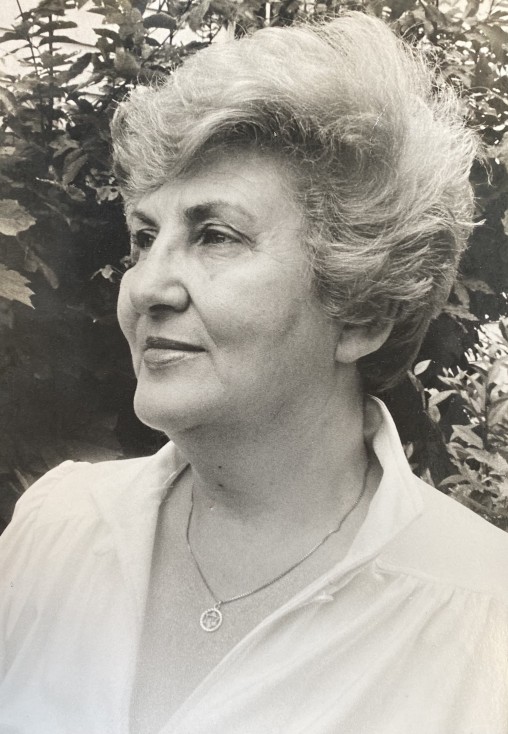 When Helene Rosenberg arrived in New Haven in 1949, she was part of a wave off Jewish Holocaust survivors determined to begin a new life. With two young children, she became one of hundreds of energetic Jewish mothers. Her life in Europe was over and forgotten. Or was it?

Trained as a nurse, and on false Aryan papers, Helene was conscripted by the Nazis to care for captured allied soldiers. Her work station consisted of a shack off hospital grounds.

Without proper supplies, Helene took desperate measures to care for her 40 patients. When allied planes bombed the city, hospital staff scrambled into bunkers. Helene, on the other hand, headed for the pharmacy where she pilfered antiseptics, bandages, medication and pain killers. Under the cover of darkness, she was undetected. She was 20 years old.

After the war, she received many letters from her patients thanking her for her care. Did they know she dodged bombs to get them supplies? Maybe not, but they did know that her care led to their recovery. In Pirke Avot, it says Someone who has saved a life, it is as though she saved a world. To the children, grandchildren and great grandchildren of those soldiers, my mother was a world-saver. I suspect an anonymous one, but a world-saver nonetheless.

Of Helene’s family, three out of 10, survived the Holocaust.  Helene managed to do this with counterfeit papers identifying her as a gentile.  She had these papers because a brother purchased them at a flea market a few years earlier.  He brought the papers home, gave them to her and said, “Someday, this will save your life.”

Helene and her husband, Willy, had three children, Pauline, Harry and Maury (of blessed memory).  She was an active participant in several local, national and international Jewish organizations. Helene, with her husband and other survivors, was involved in the concept, design and fundraising for the Holocaust Memorial built on Whalley Avenue in New Haven, the first on public space in the United States.

Helene and her husband, in conjunction with the Farband organization and other survivors, were instrumental in raising seed money for the Fortunoff Holocaust Video Archives at Yale.  Until the time of her death, she actively participated in the planning of the annual Yom HaShoah program.

When well into her 80’s, Helene was asked to participate in a healthy aging panel at Tower One/Tower East, where she had moved.  They asked her the secret to growing older gracefully.  She replied, “When I look in the mirror in the morning and I know who it is, I know it’s going to be a good day!”

When my daughter, Maddy or son, Evan visited her at the Towers, my mother, with her walker, brought them from table to table, proudly announcing, “these are my grandchildren.”

She will be remembered for her strong personality, her generosity of spirit and her amazing matzoh balls, their secret ingredient, “made with love.“

May Helene Bajcz Rosenberg’s memory live on and be a blessing to all who knew her. 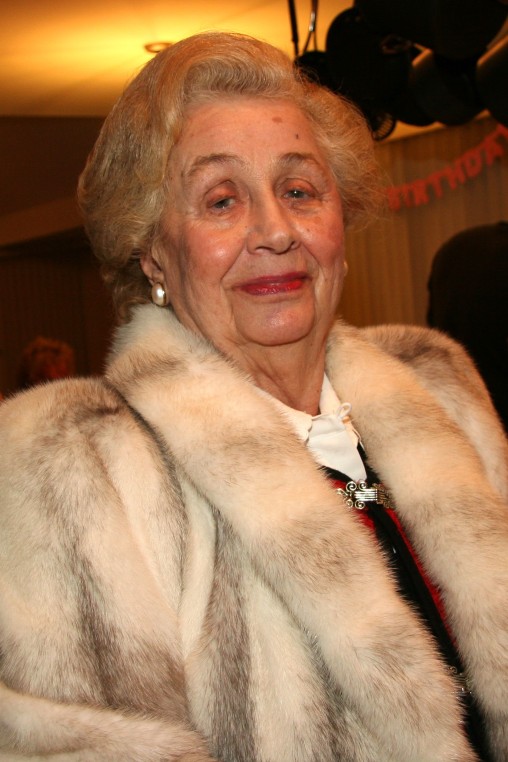 Shifra, you always greeted us with that question.
You were our lifelong teacher.

When you and Michael were newly transplanted in New Haven, the two of you gathered together survivors over coffee and a nosh and formed the “Holocaust Fellowship”.

Always our teacher, you told us second generation children of survivors the fellowship stories and the lessons of resilience, renewal, friendship and community.

In the seventies, Shifra, we children of survivors so well recall how you used your powerful persuasion and your broad community contacts to raise money for the New Haven Holocaust Memorial, the first built in our entire country on public land. You stood proudly next to the Magen David truck parked next to the Memorial at our first Memorial site Commemoration, a reminder of another wonderful tzedakah through which you and Michael gave back to sustain community.

So many of us sat in your kitchen over so many decades! The Yiddish newspaper was always nearby. Shifra, we were made welcome through your warmth, your teaching, your counsel and always, with a little something to eat.

And, in recent years, Taisa, the grand daughter of the family that hid your family in their hayloft during the Holocaust, came to live with you. At your direction, she continued to ensure we could be warmed by your open home and heart.

Shifra, thank you for your embrace. We miss you.

We will remember them with a holy sense of awe. Let us light candles for the 6 million innocent souls who died for the name of the Lord. For the lives of men and women who were exterminated by the enemy; the innocent children whose bright eyes were extinguished by the murderer; all who were in gas chambers and in trenches, liquidated in the streets of besieged ghettos, those who were lost in flames and thrown alive into graves, and those who suffered gruesome deaths under an enemy’s fateful sentence. We will also not forget, “Zakhor ve’al tishkakh pee shnaiyim.” “Remember and do not forget doubly.” Let the names and the memory of the murderers be erased. Those who disgraced and demeaned the human race. “Remember what Amalek did to you.” Let us also remember and not forget the conspiracy of silence throughout the world. While the enemy spread devastation and death, the world was silent with heartless unconcern, and some perhaps with quiet satisfaction. Their eyes were blind, their tongues silent, and they had hearts of stone. We will preserve the holy memory of our martyrs. “Forever and ever.”

A Song of Ascent

God, full of mercy God, full of mercy, who dwells in the heights, provide a sure rest upon the Divine Pressence's wings, within the range of the holy and the pure, whose shining resemble the sky's, all the souls of the six million Jews, victims of the European Holocaust, who were murdered, slaughtered, burnt and exterminated for the Sanctification of the Name, by the German Nazi assassins and their helpers from the rest of the peoples. Therefore, the Master of Mercy will protect them forever, from behind the hiding of his wings, and will tie their souls with the rope of life. The Everlasting is their heritage, the Garden of Eden shall be their resting room, and they shall rest peacefully upon their lying place, they will stand for their fate in the end of days, and let us say: Amen

How to say the Mourner’s Kaddish, by BimBam.