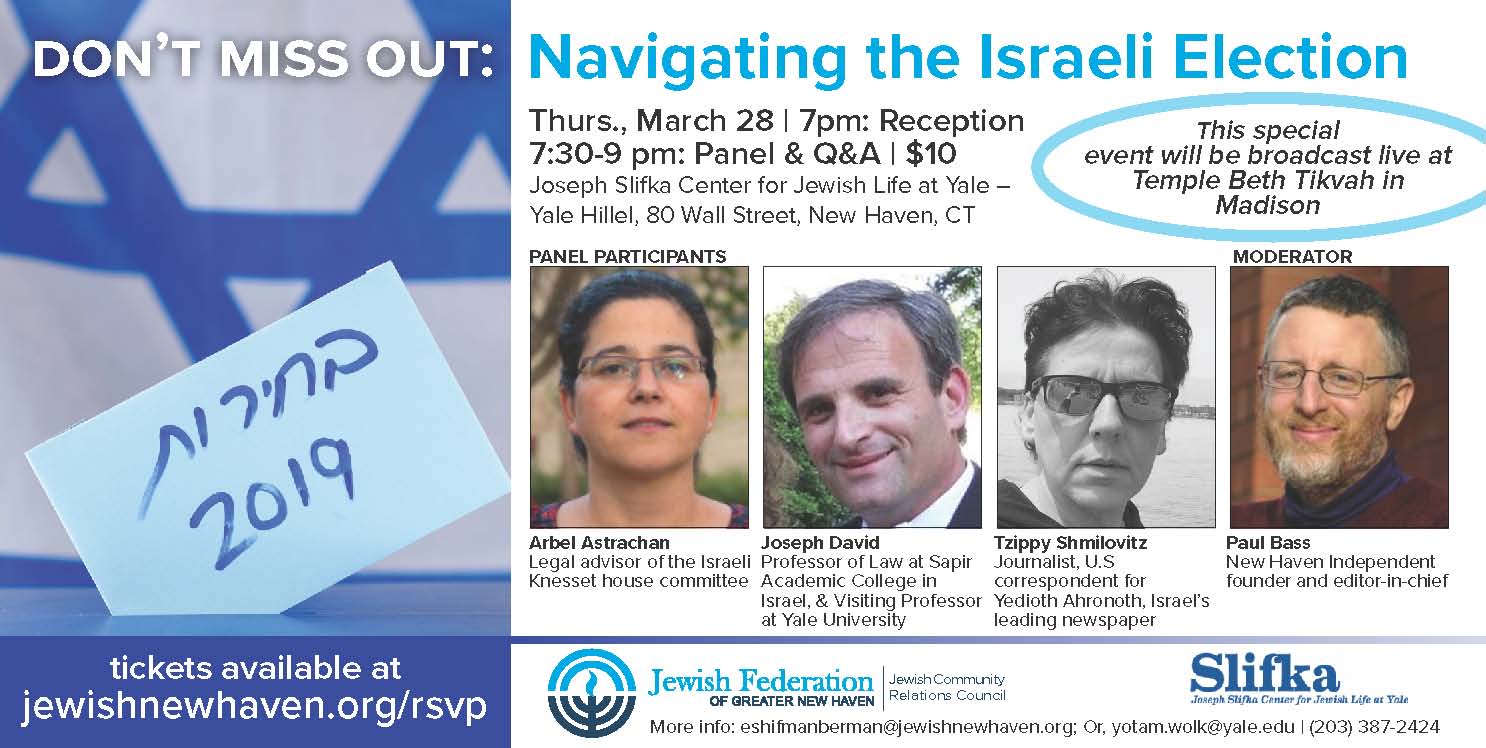 As Israel celebrates 70 years of independence, we are delighted to share in the celebration by highlighting its important contributions to the world in technology, medicine, science, music, art and culture. Look for interesting stories about the State of Israel in each issue of Shalom New Haven in 2018. In this issue, we list 70 surprising facts about Israel:

1) Israel has the eighth longest life expectancy in the world: 82 years, which is more than the United Kingdom, the U.S. and Germany.

2) Relative to its size, Israel is the largest immigrant absorbing nation on Earth; it has absorbed 350 percent of its population in 60 years.

3) Israel has more Nobel Prizes per capita than the United States, France and Germany. It also has more laureates, in real numbers, than India, Spain and China.

4) About 93 percent of Israeli homes use solar energy for water heating, the highest percentage in the world.

5) Israel has the highest number of museums per capita in the world.

7) Israel was the first country to ban underweight models.

8) Israeli banknotes have Braille markings on them.

9) The largest known dog cemetery in the ancient world was discovered in Ashkelon.

10) Israel has the most Bauhaus buildings in the world.

11) The cell phone was developed in Israel.

12) Voicemail technology was developed in Israel.

13) The first antivirus software for computers was created in Israel in 1979.

14) The city of Beersheba has the highest number of chess grandmasters per capita in the world.

15) Haifa, Israel has one of the smallest subway systems in the world with a 1.8-km track and only four carriages.

16) Israel is one of only three democracies in the world without a codified constitution. The other two are New Zealand and Britain.

17) The Dead Sea is the lowest place on Earth.

18) Israel is the only country to revive an unspoken language and establish it as its national tongue.

20) El Al, Israel’s national airline set the world record for the most passengers on a commercial flight with 1,088, people.

21) The world’s largest pepper was grown in Israel’s Moshav Ein Yahav, recorded by The Guinness Book of World Records in 2013.

22) Israel has the world’s second highest per capita of new books.

23) Israeli cows produce more milk per cow than almost any country in the world, vying only with South Korea.

24) The glue on Israeli stamps is kosher.

25) In 2009, basketball player Omri Caspi became the first Israeli to be selected in the first round of the prestigious annual NBA draft.

27) Per square kilometer, Israel has one of the highest levels of bird traffic in the world with over 500 million migrating birds crossing its airspace.

28) Since 1997, a Muslim Israeli, Jaaber Hussein, has been buying all of the state’s chametz for Pesach. The sale has an estimated value of $150 million. Hussein, gives the government representative a check for NIS 100,000 (about $25,500) as payment. After the holiday, the rabbis buy the chametz back.

29) You can buy hummus-flavored ice cream in a shop in Jaffa.

30) After 15 years of development, Israeli inventor Rafi Yoeli is currently building the world’s first flying car. It is expected to be in the market in 2020.

32) Israeli scientists have ruled that giraffe milk is kosher.

34) Cherry tomatoes were originally engineered in Israel in 1973.

35) The first electric hair remover (epilator), was created in Israel.

36) Israel has the fourth largest air force in the world.

37) Israel is the only country in the world to have free trade agreements with the US, Mexico and Canada as well as the European Union and the European Free Trade Association, at the same time.

38) Israel is the only country in the world that has the same name, is located in the same land and speaks the same language as it did 3,000 years ago.

39) An Israeli doctor headed the team that developed a vaccine against cervical cancer.

41) Israel has designed and manufactured the first flight system to protect passenger and freighter aircraft against missile attack.

42) Israel is ranked #2 in the world for venture capital funds.

43) Israel has the largest raptor migration in the world.

44) When Mrs. Golda Meir was elected Prime Minister of Israel in 1969, she became the world’s second elected female leader in modern times.

45) Israel’s Given Imaging developed the first ingestible video camera that is so small it fits inside a pill.

49) Over 1,000 letters arrive in Jerusalem every year addressed to God.

50) Israel is so small, you can run through it from west to east in two hours and from top to bottom in nine days.

51) Dr. Ruth, the famous sex therapist, was once a sniper in the Israeli army.

53) Israel is roughly half the size of Lake Michigan.

54) Israel’s population is half the size of Metro New York City.

55) Israel is ranked first place in the world in the survival of cancer patients.

56) Israel has more orchestras per capita than any other nation in the world.

57) In 1952, Albert Einstein was asked to be the president of Israel, which he declined.

58) Israel leads the world in the percentage of plastic bottles it recycles.

60) The world’s oldest copper mine is located in Israel’s desert just north of Eilat.

61) Israel is home to the only makhtesh in the world. Makhtes Ramon is often mistaken for a crater, but it is in fact the result of ancient formations of soft sandstone being covered by harder limestone and dolomite and then the whole area being uplifted by tectonic forces.

62) The average Israeli eats about 10 liters (approximately 2.6 gallons) of ice cream per year, compared to 6.2 liters per capita in Italy, home of gelato.

63) The world’s only theatre company comprised entirely of deaf and blind actors can be found in Israel. The organization Nalaga’at is located in Jaffa, where prior to the performance, visitors can try their hand at eating completely in the dark, while being served by blind individuals.

64) Israel is home to the only underwater museum in the world. In Caesarea, you’re able to dive through the underwater ruins of the ancient city.

65) Israel is the only country where the popular Starbucks coffee chain failed, as most locals enjoy their coffee from Israeli cafes.

66) Israel is the 100th smallest country in the world, just ahead of El Salvador.

67) Israel has more in-vitro fertilization per capita than any other country, and it’s free.

68) Israel boasts the world’s largest selection of soft, spreadable white cheeses, according to the Israel Dairy Board.

69) The diet of the animals at Jerusalem’s Biblical Zoo is altered annually so it is kosher for Passover.

70) Many Jerusalem apartment leases include the strange stipulation that if and when the Messiah comes, the lease is void and the tenants must move out.