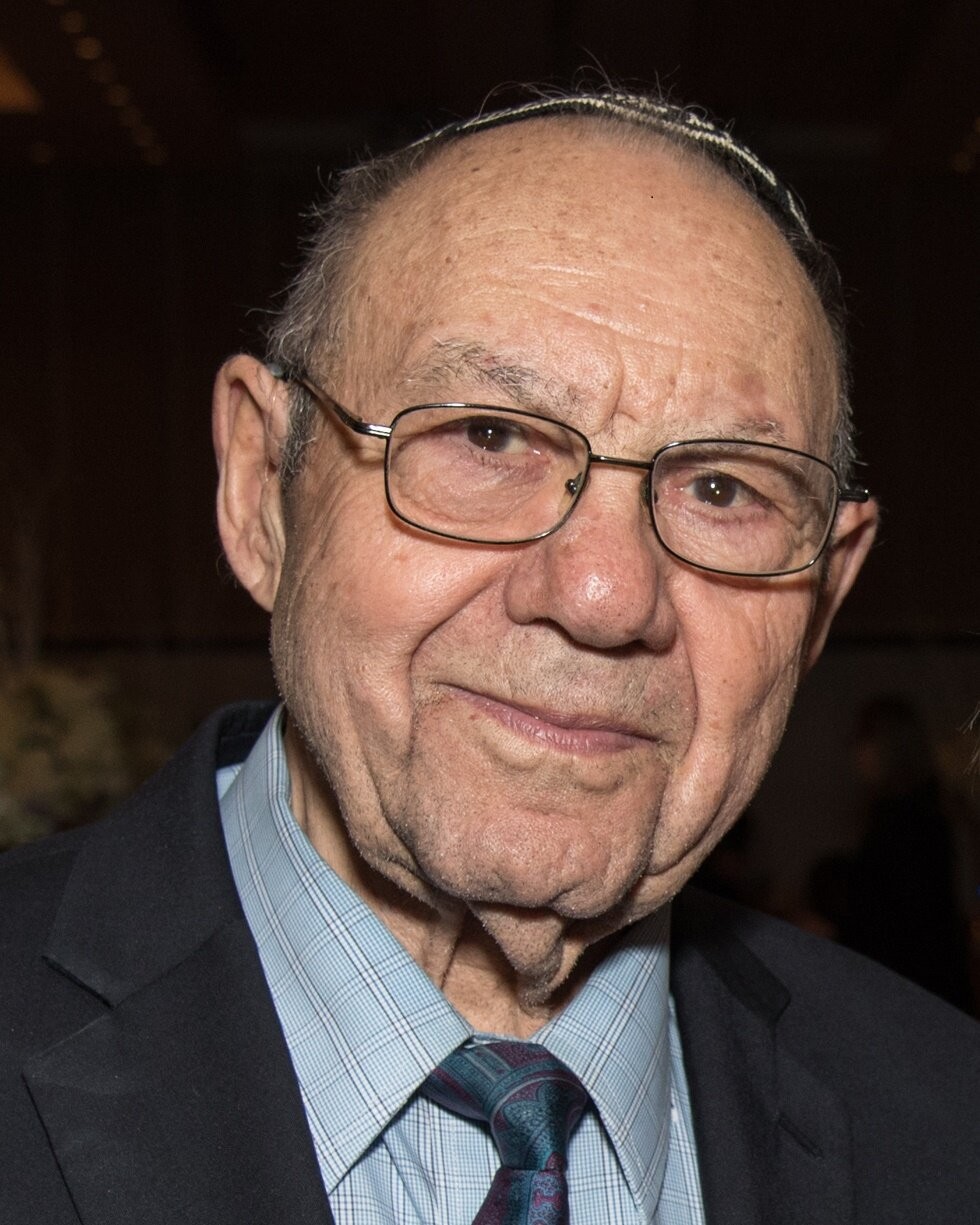 “What happened to me,” Philip Lazowski, one of the last remaining survivors who can still tell the tale, “is a lesson on what could still happen.”
Lazowski, 91, survived the Holocaust. He told his story one recent Sunday at The Towers senior complex on Church Street South in the hope that people won’t forget the Nazis’ systematic murder of six million Jews — and in the hope of preventing future genocides.
Lazowski is the former spiritual leader of Beth Hillel Synagogue in Bloomfield. He was keynote speaker at the Jewish Federation of Greater New Haven’s Holocaust Remembrance Day event, which was hosted by the Federation’s Dr. Steven Fleischman and Judith Alperin.
“I’m here not as a rabbi, but as a Holocaust survivor,” he told the packed room after being introduced by Holocaust Memory Committee Co-Chair Bruce Ditman. “What happened to me is a lesson on what could still happen.”
Lazowski’s story began when he was 11 years old and separated from his family. “There were thousands of Jews gathered in this marketplace, and I saw a Nazi take a baby from his mother’s arms, pierce it with his bayonet, and throw it like a football,” he recalled, detailing the events of April 30, 1942, in the Jewish ghetto of Zhetel, Poland.
On a podium stood a Nazi officer. “With his finger, he was pointing to the left or to the right,” Lazowski recalled. He noticed that children and the elderly were going one way, and nurses, doctors, and tailors — “those who could be of use” — were going another.
“I saw a woman standing with two girls, and I saw that she had a certificate as a nurse, so I asked her, ‘Would you take me as your son?’ And she looked at me…and she said, ‘if they let me leave with two children, maybe they’ll let me leave with three,’ and told me to hold on to her dress,” he said.
“So because of her I was pushed to the side of the living,” he said, a break in his voice. His family was interned in a movie house until trucks came to take them to a camp. “The windows were boarded up, so my mother took a chair. She hit the wood, and it broke, and she told me to jump from the second floor,” he recalled. Tell the world what happened, she told him.
Lazowski said he has shared his story over the years to honor his mother’s wish. Recently, he has redoubled his efforts out of his deep concern over the rise of antisemitism in the United States and throughout the world.
“The Nazis knew the value of propaganda and they successfully sold it to the German people,” he said. “That’s happening now with antisemitic lies. Human minds can be poisoned through indoctrination.”
New Haven Mayor Justin Elicker sounded a similar refrain. “There’s just been example after example after example that history can repeat itself,” he said. “It’s the protests in Charlottesville where individuals were emboldened to act.”
“It’s attacks on the synagogue in Pittsburgh, on the synagogue in Colleyville, Texas, it’s what’s going on in the Ukraine — ironically, in the name of undoing Nazism when the opposite is occurring,” he said.
As much as remembrance is about thinking back, “it’s about action, and how we take that knowledge of six million people — you say that number and it’s hard to digest — and the action we can take through our vote, through demonstrating not just against antisemitism but anti-hate in every form,” Elicker said.
Lazowski would survive two and a half years in a forest and a displaced persons camp in Austria before settling in America in 1947.
“I came penniless, and I worked very hard to learn the language,” Lazowski said. He worked during the day, attending school at night, and eventually earning a degree from Yeshiva University.
There a classmate invited the whole class to his wedding. At the reception, a woman at his table engaged him in conversation. “She asked where I was from, and I told her the town,” he said. “And she said, ‘Oh, my best friend told me she saved a boy from that town.’ How did they save the boy? I asked. She told me the story. I said, That’s me. I am that boy.’”
Having learned that she and her family lived in Hartford, he called the operator and asked for the number for Rabinowitz. There were six Rabinowitzes. He asked for the first one. “And who answered the phone, but the lady that saved my life,” he recalled, to the audience’s delight and gasps.
Not long after, he visited them in Hartford. “There were the two girls from the marketplace all grown up,” he said. “I fell in love with one of them, Ruth, and we’ve been married for 66 years, three sons, seven grandchildren.”
“There are very few Holocaust survivors,” he said in closing. “Soon there will be none, so it’s important that we understand where we are going.”
That’s why, he said, “I tell my story. So it’s not forgotten. When you forget, you’re vulnerable to the idea that it never happened, and then it can happen again.”
This article is reprinted with permission of New Haven Independent. It has been edited slightly for space considerations.