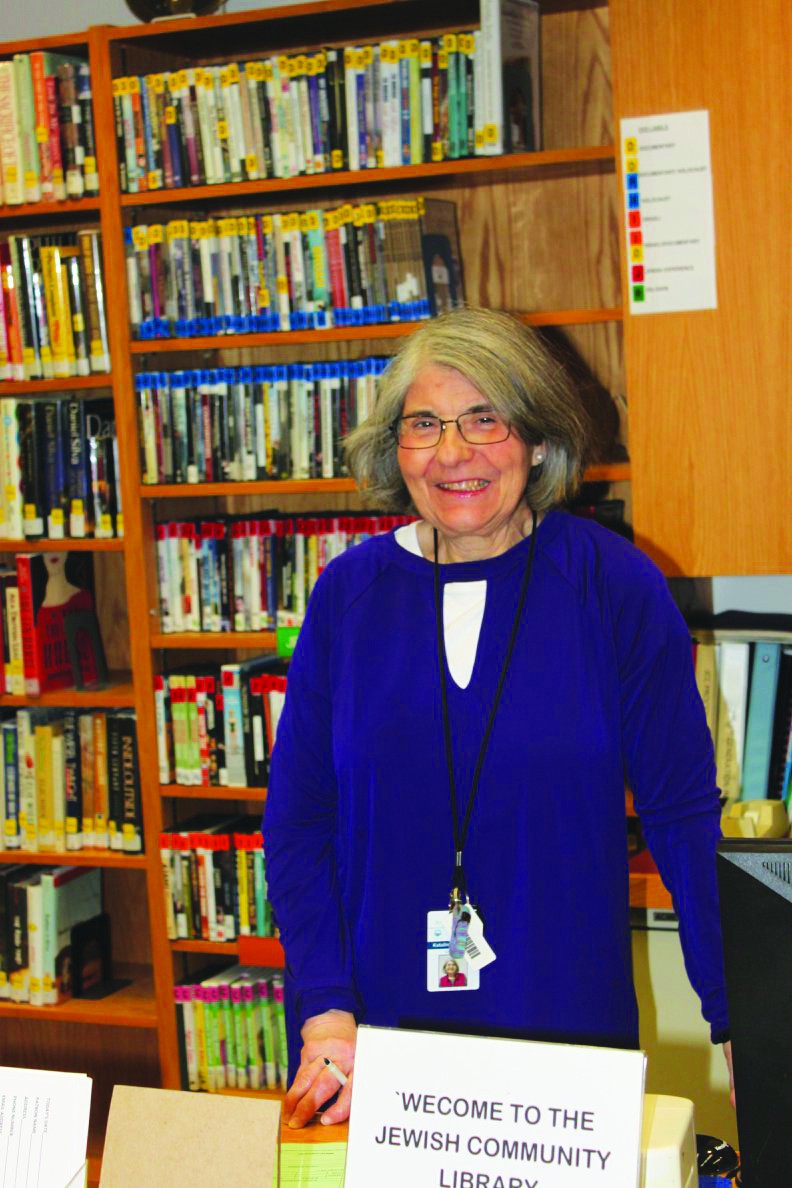 Long before the newly renovated JCC re-opened to the public after last year’s fire, Kati Baltimore was already hard at work. The hundreds of books hastily packed away to storage needed to be unpacked and put back in place. Who else but Baltimore was going to do it?

The bulk of the books now stand neatly along the walls, their titles in plain sight. Baltimore said the new arrangement makes the library seem more spacious and inviting, but seven years ago, the small library wasn’t even open to the public. That all changed when Baltimore began volunteering.

Why, did she decide to volunteer at the JCC’s library? “The library’s doors were always locked, the lights were off. I found out that there was no librarian anymore,” Baltimore said. “It bothered me that a Jewish facility could have a library that was not open. At the same time, I really needed something in my life to do and felt the need to give back.”

Once Baltimore offered to volunteer, she became the librarian. With some help from Ruth Gross, who was working at the JCC at the time, she wound up cataloguing and doing everything else for the past seven years. Baltimore didn’t realize just how much she would get back from volunteering. “For me, it was a wonderful blessing and I feel that by volunteering I am getting more than I am giving,” she admitted. Baltimore praised the JCC’s original librarian, Liz Edelglass, who established an amazing collection. “I feel I inherited something of a very good quality,” she added. “I think that the main reason we need a library like this at the Jewish community center is because it’s a uniquely Jewish collection and it allows access to books that may no longer be found in a public library.”

Many people discover the library when they go to the gym at the JCC. “If you don’t find it here, I can find it,” Baltimore said. “I love looking up information and finding it out for people.”

Despite her enthusiasm for books, Baltimore didn’t start her career as a librarian. After graduating with a biology degree, she worked in an infectious disease laboratory where she met her future husband. During the last two years of that job, Baltimore earned a masters’ degree in counseling with a specialty in career counseling. After her marriage, she chose to stay home and raise her children. Baltimore also took care of dying family members and a neighbor.

Yet what she really had always wanted to be was a librarian. “I realized that that’s what I loved more than anything else - the research, the hunt, the excitement of finding information,” Baltimore explained.

In the early ‘90s, she began taking some library courses and finally threw herself into it in 2003. A year and a half later, Baltimore earned a library science degree, specializing in children’s literature and reference.

“I love this job,” she said. ”Books have always been a big part of my life.”

After obtaining her degree, Baltimore worked at the New Haven Free Public library for several years. When she became ill, the JCC library volunteer opportunity came along and helped her recover.

Since the renovation, Baltimore has seen even more people coming in to visit the library. The library is also used for different activities like study groups, which she said also helps toraise awareness of the JCC’s collection.

In addition to a large collection of Holocaust literature and documentaries, as well as books with Jewish themes or by Jewish authors, the library boasts a wonderful Yiddish story collection on CD, and movies on the Jewish experience.

The library has a public computer which anyone can use and a reading machine that enlarges printed material to assist people with reading impairment. Her future plans include conducting workshops to train people to use the reading machine. Baltimore also hopes to host special events, possibly something with Yiddish movies and CDs, and she would also love to participate in some children’s programming.

Baltimore’s volunteering doesn’t end at the JCC library’s doors. She is the chair of the Case Memorial Library Commission, a member of the Orange Foundation and the Connecticut Emergency Response Team (CERT) in Orange. But most of her time is dedicated to the JCC library.

“Until the fire, I was here three days a week for a total of about 18 hours,” Baltimore said. “I am now planning to be here four days a week.” She admitted she could definitely use more volunteers to cover the times she is away and to help cover books and work with the database. Another project Baltimore would like to start is selling the more valuable book donations online, “I need someone to set it all up and maintain it.”

Baltimore’s passion for Jewish history and literature came a bit later in life. She admitted that she didn’t even know she was Jewish until age nine.

Born in Hungary, Baltimore was eight years old when her family escaped to Austria after the 1956 revolution. Even in the U.S., she barely knew anything about Judaism as she was growing up.

After her son started preschool at Gan Hayeled, Baltimore realized how little she knew and how much she needed to learn. She took a class at the JCC for women who wanted to learn about Judaism. “The more I learned, the more I appreciated being part of the Jewish people and recognized the tremendous values of our tradition and the humor that we have,” Baltimore said. “Maybe I am like somebody who is a convert and is much more enthusiastic than people who grow up with it. I am very proud to be a Jew and to be able to share it with other people.”