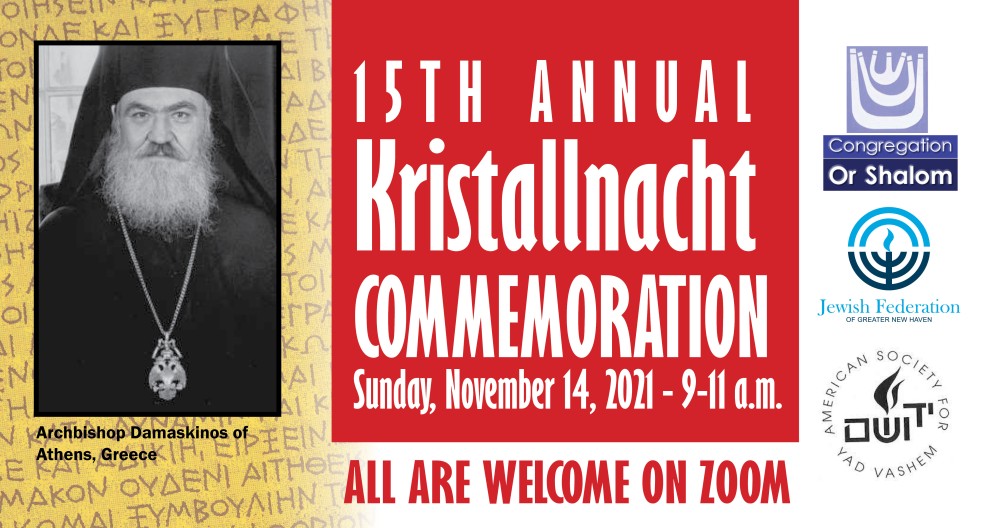 All are invited to a community-wide Kristallnacht Commemoration to be held 9 a.m. – 11 a.m. on Sunday, November 14. This year’s Commemoration, presented by Congregation Or Shalom in Orange, in partnership with the Jewish Federation of Greater New Haven and with support by the American Society for Yad Vashem, will honor the heroism of Archbishop Damaskinos of Athens. The program is free of charge. Kindly register at www.jewishnewhaven.org/kristallnacht

What was Kristallnacht?
The horrific event known as Kristallnacht, which took place on November 9th and 10th, 1938, is regarded by historians as the prelude to the Holocaust. In the course of 48 hours, mobs rampaged throughout Nazi Germany, Austria, and German-occupied Czechoslovakia, murdering, maiming, and sending tens of thousands to concentration camps.  During those two days, hundreds of synagogues were firebombed and thousands of Jewish-owned businesses were plundered. The violence of those days would be infamously called “The Nights of Broken Glass” - “Kristallnacht”- referring to the shattered windowpanes that littered the streets in the aftermath of the nightmare. Tragically, in the face of all this, the world was largely silent; almost no countries reached out to the Jews living under Nazism. “That widespread inaction in the face of evil,” according to Rabbi Wainhaus of Congregation Or Shalom, “is all the more reason to highlight the moral courage shown by a few. At our community's Kristallnacht Commemoration, we focus on the unsung heroes whose life-saving acts defied the darkness of the Holocaust.”

After stepping into the role of spiritual leader of Athens and all Greece in 1941, Archbishop Damaskinos of Athens worked hard to protect Greek citizens from German authorities, comforting those awaiting execution for speaking out against Nazism. When the Nazi regime began deporting and killing Greek Jews in 1943, Damaskinos openly protested.  He published public letters denouncing the Nazis’ actions, writing, “the Greek people must be willing to vouch for their [Jewish] brothers without hesitation.” When the Nazi authorities threatened him with execution by firing squad, Archbishop Damaskinos responded defiantly, “According to the traditions of the Greek Orthodox Church, our prelates are hanged, not shot. Please respect our traditions!”

Notably, the churches under Archbishop Damaskinos’ authority were ordered to issue Christian baptismal certificates to Jews, and he advised priests to do their best to hide those Jews for whom they could not issue certificates.  In addition, the Archbishop convinced Athens’ Chief of Police to issue false identification papers to any Jew who asked for one.

The Special Commemoration on Sunday, November 14 at 9 a.m. on Zoom.

The event will begin with the lighting of a yellow Holocaust Memorial candle and brief remarks on the significance of Kristallnacht by Rabbi Alvin Wainhaus. His Eminence Archbishop Elpidophoros of America will offer a prayer, followed by comments from Father Peter Orfanakos of St. Barbara Greek Orthodox Church in Orange, CT. A United States Senate Citation will be presented by Sen. Richard Blumenthal to the family of Archbishop Damaskinos.  Comments by the Director of Education of the American Society for Yad Vashem, Dr. Marlene W. Yahalom, and by Lea Micha of the, Int’l School for Holocaust Studies at Yad Vashem, Israel will follow. Descendants of those rescued by Archbishop Damaskinos will share their unique perspective as well. Finally, a Q&A session led by Judy Alperin, CEO of the Jewish Federation of Greater New Haven will take place. The program is free of charge. Kindly register at www.jewishnewhaven.org/kristallnacht